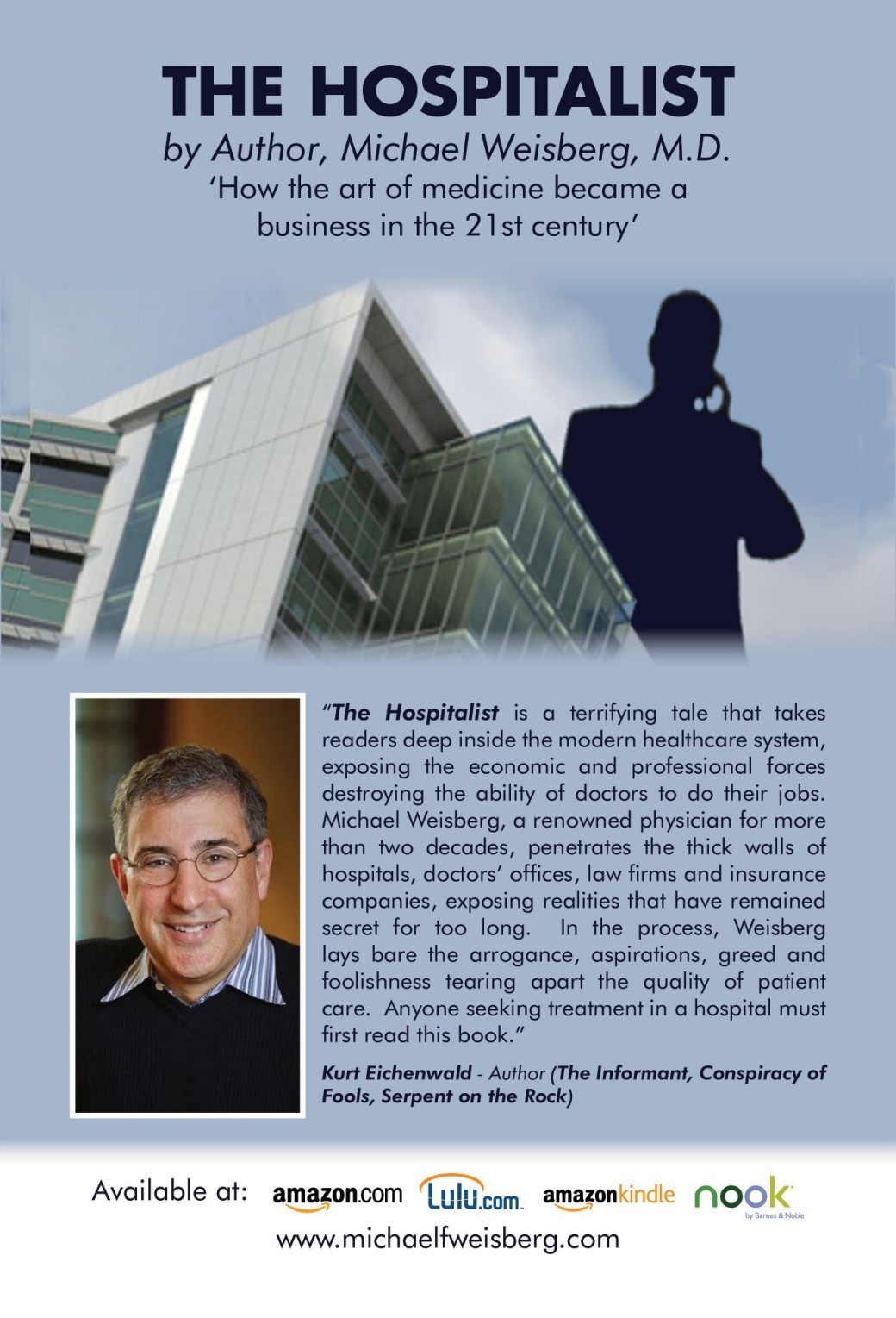 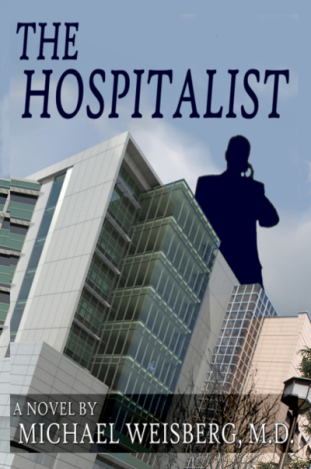 What happens when you are admitted to the hospital as a patient, and the physician assigned to be your doctor has never seen you before and knows absolutely nothing about you?

Welcome to Medicine in the 21st century, where the results of having a
Hospitalist instead of your own doctor can be disastrous.

Specialist Dr. Aaron Bernstein enters the world of the Hospitalist firsthand when he confronts a schizophrenic patient who — literally — is a ticking time-bomb.

Here’s a short story ‘Friday, The 13th’ which I originally wrote when I was in college working a summer job as an orderly in a hospital in West Palm Beach, Florida. Years later, I edited it further and won 1st prize – short story category in a contest at Texas Health Presbyterian Hospital in Dallas – 2011

I had just returned from lunch on Friday, June the thirteenth, when I was sent to get a woman patient. Following the routine I had learned in my first job in medicine as an O.R. aide/orderly, I wheeled a stretcher down to the patient’s room and then I got one of the ward nurses to sign the patient’s chart out to the O.R. She signed the papers matter-of-factly; this was a procedure that went on thousands of times a day all over the world, and at least forty times today in this hospital. I took the chart and entered the patient’s room and had the patient identify herself. She spoke in a quiet but firm voice, which seemed appropriate for her age. However, she looked much older than the fifty-five years her chart listed her as. Her face was as wrinkled as an eighty-year-old’s, her wisps of hair were grey, and her body was skinny and an unhealthy-looking pale white in color. Her lips were thin and cracking and concealed brown, broken stubs of teeth. She also had a rank odor which I couldn’t identify, but which I had often smelled around sick people. With her in the room were her thirtyish-looking son whose T-shirt identified him as a policeman and whose large sunglasses hid most of his face, and her husband who was wearing a bright orange and electric green Miami Dolphins baseball cap. The two of them assisted me in getting the lady onto the stretcher, and we left for the O.R.

On the trip to the O.R. I engaged the patient in conversation to take her mind off her upcoming operation. We came to the O.R. waiting room so I stopped to allow her husband and son to give her one last kiss. Her son quickly kissed his mother and told her not to worry, and then he moved to make room for his father. The father was a short man, and he had to struggle to get over the railing on his wife’s stretcher to reach her face. After he kissed her, we left them and went around the corner and into the O.R. We continued our conversation until I got to the room where this lady would be operated on, O.R. 4. As I parked the stretcher outside the room, I noticed for the first time that the lady was wearing an old gold religious ornament on a necklace around her neck. I asked her about it, and she said that it was her good luck charm that she never removed, and that her doctor had given her permission to wear it during the operation. I was surprised by this information since jewelry wasn’t allowed on patients in the O.R., but if her surgeon said it was okay, it was fine with me. I wished her luck and left.

Two hours passed, during which I was in and out of the O.R. Now I was back inside the unit, washing instruments in a room across from O.R. 4. I looked out into the hall and saw two nurses and a doctor racing wildly down the hall towards me pushing the crash cart. After they pushed the cart into O.R. 4, I walked over to the O.R. 4’s window and discovered that the lady I had brought up two hours earlier was having a cardiac arrest. The room was full of doctors and nurses scurrying about, trying everything to revive the woman. Most of the other aides had by this time joined me at the window, and one of them reminded me that this was the third cardiac arrest in the O.R. in the last three days and that bad things come in threes, and that yes, today was Friday the thirteenth. The other two patients had been saved, responding quickly to treatment, but this lady seemed hopeless. Finally after a half hour’s work, the doctors and nurses ceased their activity and stood motionless, like statues in a mausoleum. The only sound coming from the room was the monotonous roar of the flat line monitor. The lady was dead, the first death in the O.R. in over a year.

Everyone involved seemed stunned. The surgeon in charge slowly removed his gloves and then wiped the perspiration from his face with the back of his hand. He left the room, head on his chest, and began to walk to the waiting room to tell the lady’s family what had happened. Along the way I saw him fumble with a pack of cigarettes in his shirt pocket, shake his head, and then put his hand back by his side. Meanwhile, the head nurse instructed another aide and me to wrap the body in a sheet. This was the first time I had ever touched a dead person, and I gazed intently at her features. Her face appeared cold and hard, although when I touched her face it was still warm. The endotracheal tube was still in her mouth pushing it open as though she still had words she wanted to utter. Her grey hair, which had been concealed under a blue surgical cap during the operation and attempt at resuscitation had fallen out of from the cap and was now forming a frame of string around her face. We rolled the body back onto the stretcher and wheeled it to a back elevator and down to the morgue. The tall black man who was in charge of the morgue said the patient’s name in a soft, reverential voice and then took control of the stretcher and wheeled it behind the creaking, swinging doors and into the morgue.

The surgeon who had performed this operation still had one more operation to do, and I was sent to get the patient who was a young man for a hernia operation. As I wheeled the stretcher through the O.R., I passed the surgeon; he smelled like rotten cigarette smoke and sweat. I picked up the next patient in his room, and on the ride back to the O.R. he yelled at me about the delay. I couldn’t tell him what had happened, so I listened silently. Why, he had expected his operation to be finished by now, and he was only going to the O.R…His wife would be coming to his room expecting to see him any minute now…He hadn’t had anything to eat all day…What a bad day Friday the thirteenth had turned out to be for him…I tuned his voice out entirely when we passed the waiting room and I saw the dead lady’s husband sitting with his son in a corner of the room. The old man was hunched over with his head in his trembling hands while the son’s tear-streaked face was buried in his father’s shoulder.

Dr. Michael Weisberg has been a practicing gastroenterologist for over 23 years in Plano, Texas.  He is board certified in Internal Medicine and Gastroenterology.

He has been recognized as a ‘Super-Doctor’ by Texas Monthly and named to D Magazine’s list of best doctors eight times.  Dr. Weisberg also serves as a board member of Digestive Health Associates of Texas.

Dr. Weisberg has written stories throughout his medical career.  In 2011 he won first prize in a short-story competition sponsored by Presbyterian Hospital of Dallas.

The Hospitalist is Dr. Weisberg’s first novel.  He is currently working on his second novel.

He lives in Dallas with his wife and three children.

Texas Society for Gastroenterology and Endoscopy