In the run up to this year’s NaNoWriMo, I’d half expected to struggle, owing to the tedium of a couple of broken bones that limited my ability to roam free range, and the fine line I’d drawn between completion of the sophomore novel and starting another manuscript. Turns out, I didn’t have to worry. Somewhere between draft six, aluminum crutches that skid, and a much anticipated finish line, I locked on to the key ingredient for a successful writing experience—the inciting incident.

For many of us, the grocery store can be a harrowing experience. Years ago my ‘baby on board’ and I were nearly taken out by a grocery cart piloted by a veddy veddy important looking hooman on a cell phone too busy to notice us. When I protested the T-bone collision, its ensuing effect resulting in a twenty degree kant that toppled the produce from my cart and freaked out my heir, the important telephone person suggested that I “bite [her].”

I didn’t want to do that. I had standards and I didn’t care much for pork. What I did have were my big girl words, and it was to these that I turned in the face of profound absurdity. A speech made by the late Sir John Gielglud’s character to Liza Minnelli in the film Arthur (1981) seemed apropos, so I paraphrased, suggesting to the reckless grocery cart operator that one “didn’t often meet such quality in another person outside a holding cell or drunk tank.”

The line—spectacular in its arrogance—had the desired effect, silencing the ‘bite me’ hooman in a way that I hoped would ruin the rest of her very important day. A shining moment to be sure, its effect sparked something remarkable. Getting slammed was leveling, but taking it out on the page? Elevating. I could not do to the offending human what I might have wanted to, but a character certainly could. In that pursuit, I’ve built my philosophy for creating at NaNo Time:

What good fiction, if fiction cannot roam freely? What better a character than one that can do what we cannot?

“Seltenheit manager Kevin Gustavson had kept the sale secret, such that the transition from heritage building to hole in the ground happened without a single heart attack or lawsuit. For his subservience, Kevin got a timeshare. The others got a payout indexed to inflation. The old embalmer, unimpressed, hanged himself in the garage.”

“Symbols of the old regime, the suit of the undertaker was forbidden to them, as if looking like a mortician was some kind of intolerable offense in the house that Jocasta built. Yet Scooter took no heed of the boss’s orders, tossing his pomegranate colored blazer into the dumpster with a finality that impressed Carla Moretto Salinger Blue. The morning suit he wore, like the cigarette he smoked, was a clear act of defiance as was, she supposed, the firearm he was holding.”

“Anybody who ever worked at B.H. Hoage, Funeral Directors, where Clayton managed in the late Eighties and early Nineties, never forgot him. Whether inflicting time management strategies on the lowliest earthworm or back breaking lady heels on the feminist wedge ‘steam rollering this fine business of ours,’ Clayton left his mark, much like a cat spraying its territory.”

Rude, inane, maybe even profane, free ranging characters can drive a story farther and faster than their creator ever dreamed possible, especially when the rigorous demands of NaNoWriMo come up from behind.

Generally, I like to mull a NaNo story for a good year in advance of November 1st. Character names like “Zoltan” “Bronaugh” “Poonam” “Gus” and “Carlos the Wunder Katz” are scratched down and stored in a file along with pop scenes as they make themselves known. But what gets the beauty started is that moment THE MOMENT when you know:

On October 6, 2015, a letter was received. In it were a set of instructions and a veiled threat. “Dear Home Owner: It has come to our attention that residents have not been cleaning up after their pets. This is particularly true of Saffron Drive where cats have been roaming freely without proper banding and/or licensing.”

“City bylaws are explicit. Failure to comply shall result in seizure and a fine of up to and including $5,000. All pets seized by the municipality shall be considered forfeit, property to be retained pending appeal or adoption by an appropriate third party.”

Bronaugh Kallee scowled. It was barely past sunrise, the morning air still carrying on it that vaporous layer of moisture from a cool night and above average day time high’s for that time of year. The missive in her hand wrinkled with the wet of it. Plain stock, Helvetica lettered and baring the stamp of the nascent city’s newly minted coat of arms, it was not francked, but hand delivered. Her tax dollars at work.

She crumpled the paper in disgust. The assessors would be out soon to see if they could raise the levy on her addition. Meantime, she could recycle the plain stock paper. What else could she do with it? She didn’t own a goddamned cat.”

On October 6, 2015, a letter was delivered to my door from municipal animal control. Chilling and vague, the inference contained within was clear: our beloved neighborhood visitor, a black cat of exceptional beauty, had been singled out by city 5-O. A complaint from a single resident has forced this beauty indoors against his nature, forcing his owner and legions of fans to find a proper home for him inthe country where cats can be cats.

A story here? I think so. It incited the above paragraphs. I’ll see if it takes me through to the end of November.

What is your inciting incident? Find it and let it burn bright.

Adult, Unapologetic and Cognizant, I am. 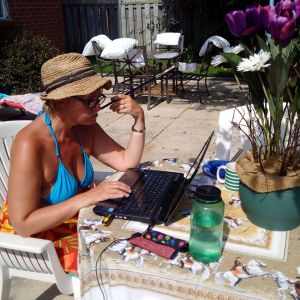 A.B. Funkhauser is a funeral director, classic car nut and wildlife enthusiast living in Ontario, Canada. Like most funeral directors, she is governed by a strong sense of altruism fueled by the belief that life chooses us and we not it. Her debut novel, HEUER LOST AND FOUND, released in April 2015 after five years of studious effort, has inspired four other full length works and over a dozen short stories. Her sophomore effort, SCOOTER NATION, is in edits for a 2016 release.

At last found, he is delivered to Weibigand Brothers Funeral Home, a ramshackle establishment peopled with above average eccentrics, including boozy Enid, a former girl friend with serious denial issues. With her help and the help of a wise cracking spirit guide, Heuer will try to move on to the next plane. But before he can do this, he must endure an inept embalming, feral whispers, and Enid’s flawed recollections of their murky past. 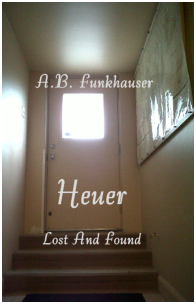 euer did many things in his lifetime, but murdering another human being was not among them. Of course he considered it at times—having Fuhrer blood in his veins practically demanded it—but logic always trumped emotion and that was what kept him from breaking the law this time. Standing over enough explosives
to level a half block, he replaced the matches in the pocket of his pimp suit, leaving Werner to curse and mutter at the 61 Division cops who had better things to do than visit the hermit house a second time.

Irmtraut, understandably, was not impressed when he appeared before her to explain. “Since our first meeting, you have forced an angina attack on your neighbor, preyed on the wits of the only person who loves you, and wreaked havoc at the office juice bar.”

“That, I can explain—” he interjected, relishing, somewhat guiltily, all the drama he’d created. “I merely sought to dispatch any papers incriminating to me. Instead, I found a bunch of tawdry shits besmirching my name.” He flapped his arms chicken-like. “They decided I was peculiar and with all these rainbow flags going up over town, they were making allegations.” He was not gay. He was nothing at all. Why did everybody insist on assigning labels? He was dead. It didn’t matter. And he hadn’t meant to set all the juice-o machines to malfunction in tandem, nor had he intended for Miss Samantha to go ass over heel and break an arm.

Irmtraut laughed at his childish protests, suggesting that he busy himself with the World Cup soccer scores. “Germany is leading, and the betting octopus is expected to weigh against the Spaniards.”

He scoffed at the suggestion; a German victory was a foregone conclusion. “Why waste time on a sure thing?”

“My what?” He was not familiar with the term ‘peccadillos.’

Irmtraut wiggled her ponderous mid-section to an unheard smoky beat.

“Oh, that,” he recalled, cringing over his play at self-release.

He would gladly discuss the arsenal in the basement, the strange paste covering his bedroom walls, or his intriguing disdain for the prodigal father. What was not up for examination was his wandering hands and the miracles they accomplished.

“You will not do that again,” she commanded.

One thought on “Let It Burn – a Guest Post by Author A.B. Funkhauser”